Who does he love now? The Chainsmokers’ Alex Pall has been in the spotlight for more than a decade — and so has his love life.

The “Closer” artist, who heads the EDM duo with Drew Taggart, hasn’t exactly been shy about his dating pursuits, candidly discussing his NSFW priorities, revealing he and Taggart had threesomes with fans and openly mourning the loss of a past relationship after he was publicly caught cheating.

“Even before success, p—y was No. 1,” the DJ told Billboard in The Chainsmokers’ 2016 cover story. “Like, ‘Why am I trying to make all this money?’ I wanted to hook up with hotter girls. I had to date a model.”

Two years later, Pall’s four-year relationship with Tori Woodward came to an abrupt — and very public — end in January 2018 when she shared CCTV footage of the musician seemingly making out with another woman.

“Alex is disgusting. Men are trash. Don’t ever forget it,” Woodward wrote via social media at the time. “They’ll look in your eyes and tell you that they love you. Then destroy you without a second thought.” She also accused him of cheating on her multiple times throughout their romance.

Pall, for his part, seemingly owned up to the drama after Woodward shared the surveillance footage.

“She deserves the best. I wish nothing but the best for her. She deserves a better guy than me,” the “Paris” artist told TMZ at the time, adding that their split taught him to “be a better person and take care of those who love you.”

Two months later, Pall stepped out with model Katelyn Byrd. Though it’s unclear when the two split, the pair were spotted together throughout 2018 and early 2019.

The “Something Just Like This” artist went public with his relationship with model Moa Aberg in May 2020. “I spent the best days 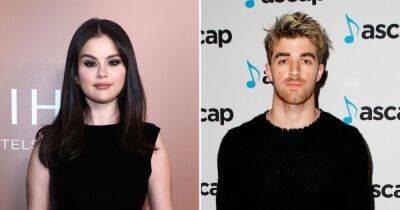