DANCING on Ice star Sylvain Longchambon was rushed to hospital after smashing his face on the ice. The pro skater split his chin open during training with his partner Coronation Street star Mollie Gallagher.

Dancing On Ice fans baffled as they spot something very different about Keith Lemon – did you notice?

DANCING On Ice fans have been left baffled after spotting something very different about Keith Lemon. The comedian was among the celebs in the audience for the ITV skating competition as it was broadcast live. Keith, real name Leigh Francis, headed to the ITV studio to support Joey Essex ahead of his Grease-themed performance.

DANCING on Ice judge, Jayne Torvill has spoken out on Ekin-Su's outfit that faced a barrage of criticism. Speaking on ITV's Loose Women, the show judge said she was left "surprised" by the controversial outfit.

DANCING On Ice star Carley Stenson has exclusively revealed that she is friends with judge Oti Mabuse off screen. Carley, 40, who first became a household name in 2000 when she played Steph Cunningham in Hollyoaks, is now following in the footsteps of husband Danny Mac. Well the ice version of it anyway as Danny appeared on Strictly Come Dancing in 2016.

DANCING On Ice fans will watch as Ekin-Su faces the dreaded skate-off in tonight's episode as bookies reveal who is most likely to win the show. Things didn't go well last week for Love Island winner Ekin-Su who will face the dreaded Dancing on Ice skate-off tonight as a set of new celebs make their first appearance on the show. Since performing last week, Ofcom has received over 100 complaints about the star's racy outfit, but fans have come out in support of Ekin-Su before she returns to the ice, claiming she could win.

DANCING On Ice star Vanessa Bauer was forced to chop off her hair seconds before skating in last night's launch show to avoid a horror accident in the opening routine. The German pro, who is partnered with ex-Towie star Joey Essex, nearly got her long hair tangled in fellow pro Sylvain Longchambon's skate while doing a daring move in rehearsals.

JOEY Essex has claimed he lives with the ghost of an 18-year-old man. The 32-year-old will make his debut on Dancing on Ice tonight when the ITV competition returns. But away from the rink former Towie star Joey lives in an incredible £3m house.

SIX star-studded celebrities made their Dancing on Ice debuts tonight, hitting the rink for the first time in a bid to impress judges and fans alike. Joey Essex opened the show, with his performance being praised as "fantastic" by the judges as he achieved an impressive first score of 27 out of 40. Things didn't go as well for Love Island winner Ekin-Su, however, who will face the dreaded Dancing on Ice skate-off next week, after fans voted her performance as the worst of the evening.

DANCING on Ice viewers all had the same complaint about tonight's launch. The ITV show returned to our screens this evening for its fifteenth series. Joey Essex, Siva Kaneswaran, Michelle Heaton, Ekin-Su Cülcüloğlu, Nile Wilson and Patsy Palmer were the first six celebrities to show off their new skills.

EKIN Su’s boyfriend Davide Sanclimenti reassured fans she was OK last night after the star was forced to pull out of Dancing On Ice training. The Love Island winner, who is partnered with Brendyn Hatfield, was banned from hitting the ice by doctors after falling ill – just days before the first live show.

DANCING on Ice 2018 champion Jake Quickenden is calling for a show shake-up ahead of the new series. The 34-year-old says judges should have experience on the ice to earn a place on the panel. It comes ahead of Strictly star Oti Mabuse's second year on Dancing on Ice as a judge.

Dancing On Ice judge Christopher Dean, 64, was taken to hospital following an accident ahead of the ITV show starting this weekend.The pro skater had to be seen by medics after breaking his finger just days before the 2023 series is set to begin.Sharing a picture of his bandaged finger to social media, he penned: "We were trying the Iron Lotus, but ended up doing a Half Nelson [referencing a fictional move in Blades of Glory] or did I just fall over a suitcase in the middle of the night."Christopher sits on the show’s panel alongside his skating partner Jayne Torvill, 65, as well as fellow celebs Oti Mabuse and Ashley Banjo.The show returns this weekend with contestants including Michelle Heaton, Mollie Gallagher and Joey Essex.Christopher’s fans and followers rushed to social media to send their best wishes to the star, who should be back on our screens on Sunday night.“Hope you heal quickly! Poor you,” Ophelia penned, while Deborah added: “I hope you’re on the mend soon.”“I would go with the iron lotus story.

Dancing On Ice star rushed to hospital after nasty accident

TOWIE'S Joey Essex has revealed a nasty injury ahead of his Dancing On Ice debut. The reality TV star, 32, who is paired with Vanessa Bauer, 26, hailed himself "lucky" after the painful mishap. Joey took to his Instagram Stories while travelling to training in a car.

FLIRTY Lorraine Kelly stunned Joey Essex by making a VERY raunchy sex joke about him live on air. The Dancing on Ice star, 32, was being introduced as a guest on the ITV daytime show when he confessed he was a first-timer.

HOLLY Willoughby led the glamour in the first look at the new series of Dancing on Ice. The presenter, who co-hosts the competition with Phillip Schofield, looked sensational in a sparkly strapless gown with a daring thigh high slit. This Morning star Holly, 41, was joined for the official shots by Phil, 60, who was dapper in a grey blazer and black trousers.

DANCING On Ice stars Joey Essex and Vanessa Bauer looked cosy as they held hands for a sweet photo. The former Towie star, 32, and the professional skater, 26, posed alongside each other for the first day of skating in the ITV studio training rink. Flashing a big smile, the pair clasped hands, while Joey placed his other hand on Vanessa's shoulder.

EMILY Atack posed in an eye-popping top on a shoot following the last ever Celebrity Juice. The comedian and TV presenter showed fans her shoulderless top on her latest photoshoot. Emily, 32, looked sensational in the outfit which featured a black and white design.

EMILY Atack was rendered speechless when she was flashed by a woman during the final episode of Celebrity Juice. The TV star, 32, was exposed to the woman's bare chest while wandering around the bowels of ITV studios with Joey Essex. During the bizarre game, in which the pair had to collect keys while being confronted with a series of dodgy sights, the pair also came face to face with a naked man in a wig.

EMILY Atack shrieked as she was confronted by a naked man in a wig on last night's Celebrity Juice. The TV star, 32, got an eyeful as she unlocked a door backstage during a challenge with Joey Essex and found Joe Swash in an uncompromising position with the nudist. Feigning shock, flustered Joe encouraged the nude man to put his pants on while bundling him out of the closet. 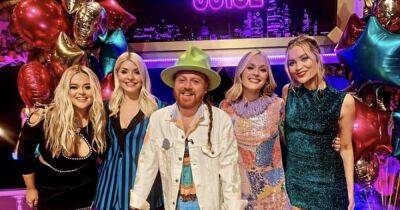 Holly Willoughby took a stumble while filming the last ever episode of Celebrity Juice.

What about having some fun reading the latest showbiz news & updates on Joey Essex? Those who enter celebfans.org once will stay with us forever! Stop wasting time looking for something else, because here you will get the latest news on Joey Essex, scandals, engagements and divorces! Do not miss the opportunity to check out our breaking stories on Hollywood's hottest star Joey Essex!