Viewers were watching the badgers in Love Island-style night vision on the BBC Two evening show. The black and white creatures, who live in dens called setts, then turned away from one another and rubbed their bums together.

One remarked, referring to an earlier comment about a large rodent who had appeared in shot: "Anal rubbing, and the beaver is out! Only on #winterwatch." Another called it a "Hall of Fame live TV presenting moment". Most read in TVSNORTY BOY? Love Island in chaos after video of Will Young shows him 'with white powder'SECOND ACT EastEnders legend to return to acting to play cop after 15 yearsFOR PETE'S SAKE Pete Wicks quits Towie after seven years on the showlooking davine Davina McCall, 55, looks incredible as she strips down to lace lingerie A third tweeted with an air of disdain: "Those badgers are manky b***ards." Gillian who was co-presenting alongside Iolo Williams while Chris

Davina McCall, 55, looks incredible as she strips down to black lace lingerie 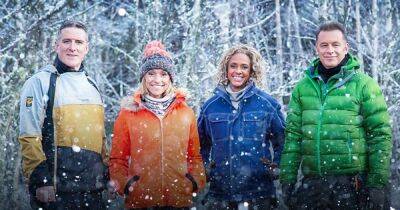