Telling The Sun: “My best friend said it was tough seeing all the hateful comments.Think she did try to remove some of them when I came out so there wasn't too many to see."She added: "But they're in the DM's, they're constantly gonna be in the comments.So it's kind of hard to escape."However, the former reality TV star has praised bosses for implementing a social media ban, as she thinks it will encourage only positive followers to seek out their favourite personalities.It comes as Charlie’s dad Nick promised to spend as much time as possible with his youngest son Eddie, eight, after feeling guilty for not being there for his older children in their younger years.The television presenter is also father to son TJ, 27, from his relationship with dancer Paula Beckett, and he shares Eddie with his ex-wife Jessica Rose Moor.DIY SOS host Nick says he was busy carving out his screen career in previous years and regrets not spending more time with his family.He explained to the Mirror: "It’s the most difficult thing in modern life to weigh up the amount you work to improve their lifestyles versus missing your children grow up."I’m not sure I got that right with my older children, I was probably away too much.So I’m making a greater effort now with my eight-year-old."Nick says being a father to a young boy at the age of 60 has given him a new lease of life.He said: "Having an eight-year-old son at the age of 60 is the most wonderful thing in the world.“It keeps you young, makes you see the world through new eyes."Nick is now dating businesswoman Katie Dadzie, 33, who he regularly steps out to events with and shares pictures of them together on social media.He made his first public appearance with Katie in September 2021, a

Nick Knowles, 59, breaks silence on romance with girlfriend, 32, and hits back at cruel trolls who slam their age gap 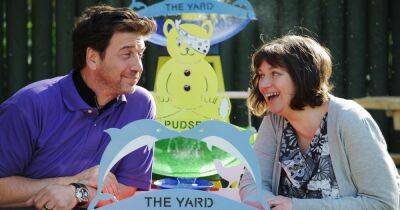