Instagram: "Personally I think this is disgusting!"Kirsty shared her comment on top of a PETA video, with the text reading: "These Schiaparelli looks have everyone talking about the horrors of trophy hunting, which murders wild animals and tears families apart."We're also asking folks to consider the real animals who did suffer and die for this runway show, sheep and silkworms."President of PETA, Ingrid Newkirk also released a statement to Metro.co.uk, sharing their praise for Kylie and other celebrities at the Paris event.It read: "These fabulously innovative three-dimensional animal heads show that where there’s a will, there’s a way – and Kylie, Naomi [Campbell] and Irina [Shayk]’s looks celebrate the beauty of wild animals and maybe a statement against trophy hunting, in which lions and wolves are torn apart to satisfy human egotism."Next up: Peta urges Kylie and the others to extend this creativity to exclude sheep shorn bloody for wool and silkworms boiled alive in their cocoons."We encourage everyone to stick with 100 percent cruelty-free designs that showcase human ingenuity and prevent animal suffering."Ingrid added to TMZ: "Kylie’s look celebrates lions’ beauty and may be a statement against trophy hunting, in which lion families are torn apart to satisfy human egotism."Naomi Campbell and Irina Shayk also wore similar looks which appeared to embody the theme of "embroidered animals".Kirsty was not the only one to speak out against Kylie's outfit choice, Carrie Johnson, the wife of the former PM, Boris Johnson shared her views.She wrote on Instagram alongside a screenshot: "Grim! Real or fake, this just promotes trophy hunting.

Yuck!"Kylie has come under criticism in the past for her outfits containing fur, most 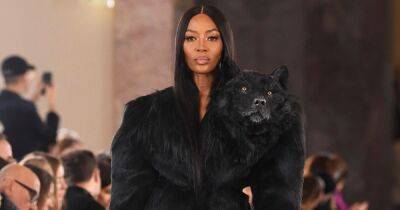