Katie Price has reveled her new boobs after an operation to have them enlarged but fans are split by the big change. The former glamour model, 44, took to Instagram on Wednesday night posing in a picture to her 2.6M followers and fans.

Katie can be seen wearing a green jumpsuit as she smiles to the camera. She recently admitted that she had been left in agony post surgery adding that it was the "biggest boob job ever".

Last year, Katie said that she wanted to have the biggest breasts in Britain. But many of her fans are less than amused tonight, with some going as far as unfollowing her on social media and branding her "stupid".

One person commented: "Everything is out of proportion," with a crying face emoji. Another wrote: "Gurl they’re awfully too big. You need a reduction." Someone else penned: "I'm unfollowing now... can't look at how ridiculous u look, I grew to like u when u seemed to have grown up.."

But some took a different tact, and weren't impressed with other "bullying" followers. One said: "Love to you Katie! So Quickly people seem to have forgotten to #bekind"

We told you earlier how Katie has been proudly posing alongside used socks and underwear as she intends to flog old items to fans. She's created an Instagram account to sell off some old clothing items, with many being posted framed and signed by the star herself.

The mother-of-five announced new business on social media last week and said she would be punting framed and signed sets of pants, bras and suspenders for as little as £350, while individual lingerie is going for £200.

KATIE Price was feeling the love from son Harvey after he drew her a sentimental 'Valentine's Day card'. The TV star was smothered in kisses from her son in the adorable picture.

KATIE Price is embroiled in a fresh row with the council after reuniting with her ex Carl Woods. The TV star was first warned last year after sparking a council probe into if salesman Carl was storing motors at her mucky mansion.

KATIE Price has shown off her biggest ever boobs in a tight-fitting PVC outfit in a new OnlyFans shoot. The former glamour model stripped down to a red bodysuit for the Valentine's Day themed snaps. Katie, 44, showed off her impressive cleavage in the new OnlyFans photos, as she unzipped her latex all-in-one.

FORMER Love Island star Megan Barton Hanson and Hannah Elizabeth sent pulses racing when they posted a picture of themselves in sexy underwear for an OnlyFans shoot. The pair, who both found fame on the ITV2 dating show, treated fans to a glimpse of their racy shoot on social media. Megan, 28 , appeared on the show in 2018 and was coupled with Wes Nelson.

KATIE Price's son Junior has landed a huge gig opportunity as he revealed he'll be performing at Bestival in the summer. The musician, 17, has followed in his father Peter Andre's footsteps after he released his first single Slide last year, which became an instant hit with his fans.

KATIE PRICE has opened up about why she decided to once again go under the knife for her biggest ever boob job. The Mucky Mansion reality star recently addressed her latest surgery in a series of new television interviews.

KATIE Price has declared she's done with husbands and marriage in the wake of her split from Carl Woods. The star, 44, was engaged to the former Love Island contestant and they had been hoping to tie the knot. However, they split before he could become the fourth man she has walked down the aisle with.

KATIE Price has a bizarre new business up her sleeve - and it's not quite the glamour we're used to seeing from her. The 44-year-old explained she wants to bring out her own range of jazzed-up mobility scooters. She explained she's made over four of the electric vehicles since breaking both her feet in a nightmare fall.

STEPPING into the Tattoo Fixers studio, Gia Clarke hoped to finally rid herself of an embarrassing inking. The holiday rep had previously had the words “No Possible!” tattooed on her bum, which was mocked for appearing like a racy sex joke.

KATIE Price left little to the imagination in tiny underwear as she posed for a sizzling OnlyFans shoot. The former glamour wowed in pink bralette and matching knickers to promote her account on the over 18s site. Katie, 44, who joined OnlyFans in January 2022, took to Instagram to share the sizzling snap. 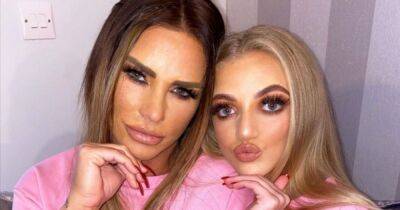 Katie Price has been slammed by fans for using a filter on a recent snap with her daughter Princess Andre and sister Sophie Price.

KATIE Price fans are all saying the same thing as she poses with her lookalike daughter and sister. The former glamour model, 44, posed with her daughter Princess and sister Sophie for a snap.

KATIE Price has revealed she'll never run again after shattering both of her feet in a horror accident. The 44-year-old was pretending to gallop around her hotel complex like a horse while on holiday with ex Carl Woods in 2020, when she misjudged a wall jump and plunged 20ft onto concrete. She required emergency surgery, spent 10 months in a wheelchair and needed to learn to walk again.

KATIE Price has revealed she plans to make some cash off Harvey’s 21st birthday by throwing a party for the public. The 44-year-old, who did her first TV interview in two years tonight, told how Harvey wanted to celebrate in a nightclub, with a Barney theme. Katie explained how she was going to sell tickets so people could party alongside him and asked any venues interested to get in touch.

KATIE Price has paid tribute to her eldest daughter Princess with a huge inking following a seven-hour tattoo session. The former glamour model sat down with Tattoo Fixers star Jay Hutton to get the new body art on her left leg. Mum-of-five Katie, 44, opted for a pouty image of her daughter Princess - who she shares with ex-husband Peter Andre - wearing extensive make-up for the tattoo.

Katie Holmes revealed that she didn't want to be 'greedy' about landing acting jobs after making her film debut 25 years ago in Ang Lee's 1997 movie The Ice Storm.The 44-year-old actress during an appearance on Tuesday on The Tonight Show Starring Jimmy Fallon was asked what she remembered about her first film.'Well, I was 17, and I remember we came to New York, my mom and I, and we shot it, and I thought, ''Oh, this is what I want to do. Great'',' answered Katie who wore a black coat, white shirt and black fringed skirt on the NBC talk show.

KATIE Price has hit back at cruel online trolls who mum-shamed her for sleeping in the same bed as her grown-up son Harvey. Over Christmas, the 44-year-old shared a video on Instagram of herself cuddling the 20-year-old, who has Prader-Willi Syndrome, autism and is blind. But addressing the backlash during an interview with Women's Radio Station yesterday, Katie explained that Harvey's condition makes it very different than if it had been one of her other children.

KATIE Price showed off her brand new boobs as she continued her makeover this weekend. The 44-year-old treated herself to some long blonde hair extensions and revealed the results while posing with her hoody unzipped.

KATIE Price has been seen enjoying herself at KSI's boxing match. The former glamour model attended the event at the OVO Arena Wembley in London on Saturday night. Katie rocked a braless in a sheer sheer black jumpsuit as she watched KSI take on FaZe Temperrr over the weekend.