CORONATION Street fans could not bare to look at their TV screens after witnessing Gemma Winter scoff a burger in front of their eyes. Fans of the ITV soap were left dismayed and all saying the same thing as Gemma chowed down on the burger created especially for her by husband Chesney.

During the episode, after Gemma revealed Chesney had been talking in his sleep about cheese and bacon it prompted him to come up with a cunning new business plan. The cash-strapped couple have been trying to come up with innovative ways to earn more money for their family as well as to pay for their upcoming wedding.

Gemma has begun a babysitting group to rake in hundreds of extra pounds a day having completed a successful trial with Micheal's daughter Glory. This led Chesney to try and come up with a perfect new burger recipe that he could somehow transform into a money-making idea.

Read More on CorrieSlim Sue I’m A Celeb’s Sue Cleaver looks thinner than ever and worlds away from CorrieHARD TIMES Corrie star Georgia Taylor’s heartbroken ex says his life ‘fell apart’ In order to get it right, the dad-of-five served up his first attempt for wife-to-be Gemma who wasted no time in trying it out. While the burger was a huge hit with Gemma, Chesney revealed he would not be ploughing ahead with his big business venture just yet but reassured her it would happen 'one day'.

But fans could not focus on anything Chesney had to say as they expressed their displeasure at seeing Gemma eat the burger and questioned if it really needed to be shown. One fan raged: "Why do they keep showing her eating and talking with her mouth full, and always shouting." Most read in SoapsSOAPER HERO Corrie's Alya Nazir stabbed by crazed knifeman in first look at horror

CORONATION Street has been hit with Ofcom complaints over its extremism storyling that saw one character being stabbed. Over 70 viewers reached out to the telly watchdog over the violent racial abuse plot that aired last week. Blake - who is played by actor Adam Little - stabbed Alya Nazir as part of a terror attack at the refugee drop in centre.

CORONATION Street stars have slammed a decision to cut the funding for a local theatre that produced some of the country’s biggest actors. Oldham Coliseum has announced it has been forced to cancel its planned shows from March after its funding was removed by Arts Council England.

LAURENCE Reeves seemed like a perfect fit for Sean Tully upon their first introduction. But the Coronation Street newcomer is unable to keep his dark past under wraps and it could lead to mortal danger. 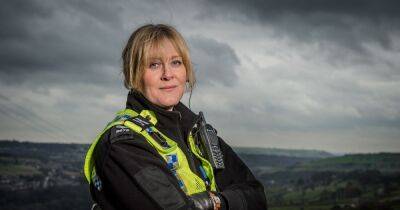 The latest and final series of Happy Valley has left viewers on the edge of their seats as it returns after years off the air.

AFTER being treated by her son Jason with the getaway of a lifetime, Eileen Grimshaw returns to the cobbles. But her return to Coronation Street doesn't go as smoothly as anticipated - and someone even gets hurt. ITV viewers will remember that the outspoken Underworld machinist was invited to spend a month in Thailand with her son Jason.

CORONATION Street star Luke Delaney surprised fans when he showcased his new face tattoos - but it may not be all it seems. The actor - who played the character is called Dave Fairchild on the ITV soap - looked very different as he sported the new inking. Luke rocked a tear drop tattoo on his left cheek and symbols along his neck.

Coronation Street and Hollyoaks fans gobsmacked as soap legend appears in Emmerdale- did you spot her?

SOAP actress Martine Brown appeared on Emmerdale last night as the mysterious character, Joy. But as she went on a date with Mary, viewers couldn't help but notice something extremely familiar about her face.

CORONATION Street has been cancelled tonight - as the soap schedules are plunged into chaos again. However, ITV has made sure that Coronation Street fans won't have to go without their fix for too long... again.

CORONATION Street star Vanessa Hehir has gone back to her job as a professional photographer just days after revealing she has quit the soap. The 41-year-old, who also starred in Waterloo Road, played church goer Esther Hargrave on the Cobbles since September.

Coronation Street legend Helen Worth, 72, was positively beaming as she led those set to collect honours at the castle today.The soap actress grinned widely as she stopped to chat to Prince William, who honoured her with an MBE.The Ossett-born actress was thrilled to be given her MBE for services to drama.The star looked lovely as she posed with her award outside afterwards wearing a smart black blazer and matching black skirt.She wore a chic black and white blouse beneath the blazer and completed the look with an elegant fascinator, which included a back headband with some subtle netting.Helen has played the iconic Gail Platt on Coronation Street since 1974.The pictures also show the soap star receiving her award inside the castle, where she can be seen meeting Prince William in a stunning gilded room.The Prince of Wales, who stood on a large red carpet with gold trimming, was smiling widely as he conversed with the actress.Another picture showed him stooping down to fasten her medal to her dress, as they continued to chat.The star also appeared to shake the royal’s hand as they exchanged meaningful conversation. Helen was joined at the ceremony by England's chief nurse Dame Ruth Beverley (Ruth May), who was made a Dame Commander for her contribution to nursing, midwifery and the NHS.Meanwhile, visual artist Cornelia Parker was made a CBE for services to the arts after her well-known work on large-scale installations.The Bailiff of Jersey, Sir Timothy Le Cocq, was made a Knight Bachelor for services to the bailiwick.Andrew Rhodes was rewarded for 30 years of policing with an OBE for services to emergency responder wellbeing and mental health.Air Vice-Marshal Suraya Marshall was also made a CBE, while Jonathan Powell

MAKING ends meet has sometimes been a challenge for Chesney Brown. But the Coronation Street family man gets a new business idea and success could be around the corner. Chesney has always lived modestly in the cobbles particularly while working as an assistant in Dev Alahan's Prima Doner.

CORONATION Street fans have been left heartbroken over Daisy Midgeley’s confession. In tonight’s episode Daniel Osbourne went through Daisy’s old school books to find her old pals to invite to the wedding after help from Jenny. But when Daisy found out what he was doing she was crushed - and opened up to him about what the girls did to her when her baby brother Tom died.

CORRIE fans spot huge blunder in Summer Spellman plot while she was being held hostage by Mike. The ITV soap's recent episode saw Mike locking up Summer in his nursery after she found out about Mike's affair with Ava and son Callum.

CORRIE fans fear for Summer Spellman as she fights for her life while being held hostage by Mike. Mike locked up Summer in his nursery after she found out about Mike's affair with Ava and son Callum. He went to extreme lengths to hide his son from Esther - which led to Summer passing out due to her glucose levels.

SERIAL killer Stephen Reid strikes again as on location photos show him desperately get rid of Teddy Thompkins' body. Next week on the ITV soap, the sketchy businessman (Todd Boyce) will take out his next victim. Teddy arrived on the cobbles looking for his son Leo Thompkins - who Stephen accidentally murdered.

DAISY Midgeley is gearing up to tie the knot with Daniel Osbourne. But there's trouble ahead for the Coronation Street favourite when her other half comes up with a wedding guest list. Daniel Osbourne (played by Rob Mallard) chose to bite the bullet and ask for Daisy's hand in marriage during the festive season.