Cheryl has opened up in an emotional interview revealing that the tragic death of Sarah Harding changed her perspective on life.

The former X Factor judge spoke candidly about the impact Sarah's death had on her life and added the late singer "wasn't ready to leave". Sarah died aged 39 in September 2021 after being diagnosed with terminal breast cancer earlier that year.

Cheryl, 39, found fame alongside Sarah, Kimberley Walsh, Nicola Roberts, and Nadine Coyle on Popstars: The Rivals in 2002. Following Sarah's death, the group reunited at a charity event last year to pay tribute to her legacy.

Speaking to Mail Online, Cheryl said: "A lot of conversations we had before she left really sparked a different perspective for me, and I'll carry that. She wasn't ready to leave and I think, 'Well I'm still here'. I've got the gift of life to still live, and I'll do it with her in mind. It does shift a lot of things in your own heart."

After almost a decade of success, Girls Aloud announced they would be taking a hiatus in 2009 before returning for a 10-year reunion in 2013. The group soon announced they were splitting for good.

Following Sarah's death, Cheryl shared the tragedy has brought the girls closer together.

She continued: "With the loss and our age we just appreciate and love each other so much more. We always have loved each other, obviously. But it's just a different, there's a different depth to it all now."

While many fans have been hoping Girls Aloud will follow in the Spice Girls' footsteps with a reunion tour, it doesn't seem like that will happen anytime soon.

Cheryl explained: "We haven't spoken about Girls Aloud stuff since we learned of Sarah's diagnosis. What Sarah's departure did do was bring us all really a lot

CHERYL appeared to be holding back tears after being left overwhelmed at the outpouring of support following her highly-praised West End performance. The Girls Aloud singer appeared glassy-eyed as she took to the stage for the curtain call for last night's 2:22: A Ghost Story press evening - and received a standing ovation.

LOVE Island fans did a double take last night after spotting something off about Will Young's clothes on his date with new girl Jessie. As the pair enjoyed a romantic picnic, farmer and TikTok star Will's retro patterned shirt appeared to have a large tear under the armpit.

CHERYL has opened up about the death of her Girls Aloud bandmate Sarah Harding, saying she "wasn't ready to leave". The singer, 39, has spoken candidly about her close friend and admitted her passing has made her think differently about her own life. Sarah died from breast cancer in September 2021 aged 39 and Cheryl is now determined to live her life "with her in mind". 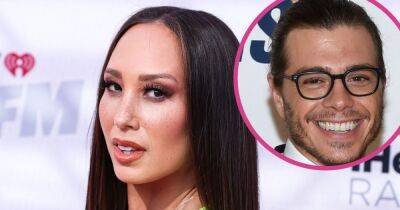 Cheryl Burke Reflects on Being ‘Alone’ But ‘Not Lonely’ Amid Ex-Husband Matthew Lawrence’s Romance With Chilli: ‘I Love Me’

Proud of herself! Cheryl Burke shed some light about her state of mind amid Matthew Lawrence‘s romance with TLC’s Chilli.

HOLLYOAKS star Carley Stenson has been prevented from attempting the show's most dangerous move - by her mum. The actress, 40, who will performing for the first time this weekend, said she "promised" her mum that she would avoid the very risky ice skating move. It would be every mother's worst nightmare, for their child to attempt the death-defying headbanger, which involves a skater being picked up by the ankle and spun around by their partner.

LOVE Island's Paige Turley looks completely unrecognisable just two years after appearing on the show. The reality star participated in the smash-hit ITV series during its first ever winter edition. Scottish woman Paige went on to win the show with Finley Tapp after 43 days in the reality villa.